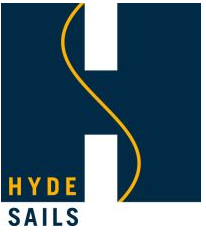 The growth of Hyde’s network of local lofts in the UK continues with the appointment of Mitchell Sails as Hyde’s Cornish distibutor.

Based in Fowey, Mitchell Sails was established by Andy Mitchell in 1983 when the previous sailmaker in Fowey stopped trading. Now run by Andy Mitchell and Alan Harris, the loft is ideally situated to service Plymouth and Cornwall. Based on the water front in Fowey, equidistance between Falmouth and Plymouth, the loft designs and makes sails and covers also providing a quick repair service. During the winter, the loft provides an onsite valeting service washing and repairing sails and covers.

The two faces behind the loft offer a wealth of experience. Andy Mitchell started sailmaking while he was still at school, working with a local sailmaker. After school he joined the Navy before returning to sailmaking in late ‘70s. He has been racing competitively for over 40 years in a variety of boats, including a Troy, which he owned for eight years, and a GK24.

He currently sails a 505 and Fowey River Dinghy. He has been making and repairing sails and covers since 1983. Alan Harris started his sailmaking apprenticeship in 2005 with Mitchell Sails. He then worked for a couple of big name sailmakers in New Zealand and Australia before returning to the UK to complete a Foundation degree in business management followed by a full degree in Marine Science. During his time in Australia and New Zealand, he sailed 16ft Skiffs, Etchells and Mumm 30s, while back in the UK he competed in J24s and an A35 before buying a Sadler 25, which he refitted to compete in the 2009 ARC.

The loft is currently very busy making sails for a variety of boats including Fowey Rivers, Ballads and local racing yachts in both laminate and dacron sailcloth. Speaking about the appointment, Alan Harris said he was proud to be working with the Hyde brand: ‘Distributing Hyde Sails will be an exciting task. Making high quality sails for the racing and cruising scene in Cornwall and Plymouth is something that has always been our focus and we look forward to a strong future for the loft working with Hyde Sails.’

Three new masts being stepped by Sail Shape this winter.