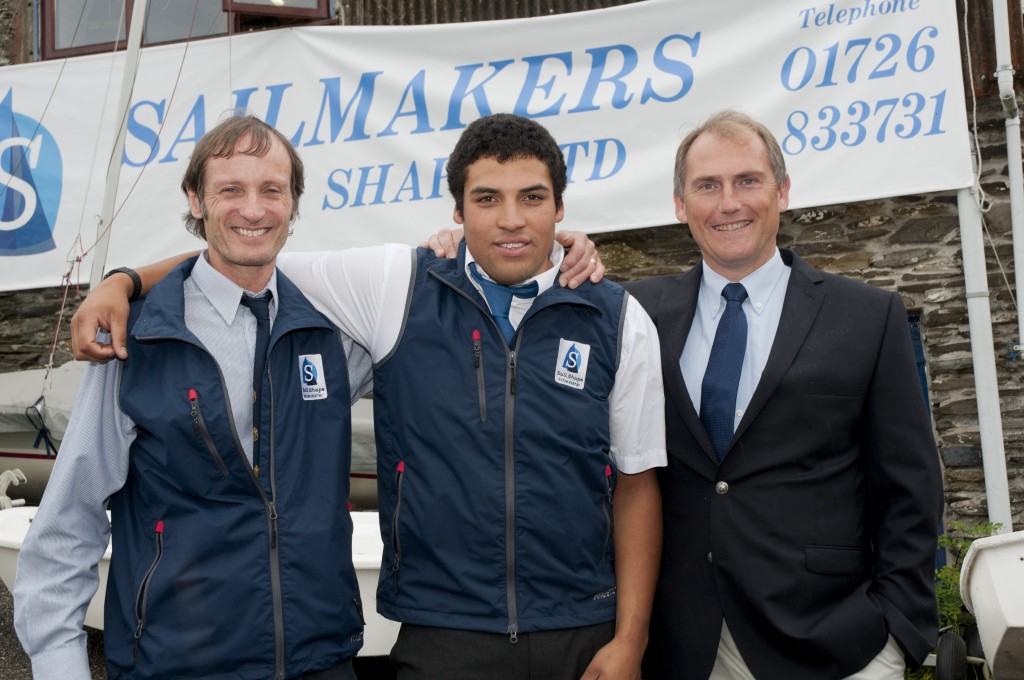 Legendary sailor, Pete Goss MBE has helped re-launch a sail making business in Fowey, which has been taken over by the student of the original owner. Alan Harris-Guerrero (24) served an apprenticeship with Andy Mitchell of Mitchell’s Sails, before travelling to Australia and New Zealand to further his career. Now back in the town where he went to school, Alan has just bought the business and is now employing his former boss! At an official launch ceremony today (Tuesday 6 September) Pete Goss spoke of his enthusiasm supporting new ventures involving young people.

Alan, who last year sailed across the Atlantic twice in a Sadler 25*, has renamed the business Sail Shape Limited offering the designing, making and repairing of sails, covers and awnings. He is also a supplier of running and standing rigging for yachts and a distributor for Hyde Sails. He now employs two people, his former boss Andy Mitchell and apprentice Hans Wehmeyer who also went to Fowey Community College. Alan says though his dream of owning his own company has come true, he’s aware of the challenges ahead:

‘I appreciate that this will be hard work but with Andy’s support and that of my suppliers and customers, who I thank wholeheartedly, I’m sure we can broaden our scope and make a go of the business. My working relationship with Andy is superb and I know that together we can now develop the one design and cruiser sail business particularly. I’m only sorry I couldn’t invite all my customers to the launch, but with that many people I was worried that the loft floor might give way!’

Andy Mitchell, who founded Mitchell Sails in 1983, marked the handover of the business to Alan by presenting him with a palm, a traditional piece of sail making equipment, and said:

‘Alan was a very willing apprentice before heading off to work in Australia and New Zealand, but like a boomerang, he came back and now I wish him all the best as he takes over the business.’

‘I love new beginnings. I first came across Alan when I read about his extraordinary trip across the Atlantic and always hoped I would meet him one day. When he called me and all this enthusiasm came down the phone, I just knew I had to support this little loft with big ideas. Alan’s challenges when crossing the Atlantic will actually help him face the tasks ahead as he ventures into the world of business and I wish him well.’

Pete then invited the guests to raise their glasses to ‘fair winds for the future and to lofty ideas’.

Three new masts being stepped by Sail Shape this winter.